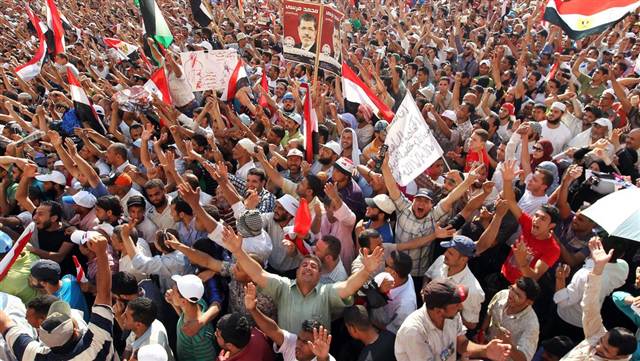 The Muslim Brotherhood celebrates in Tahrir Square after their Islamist candidate, Mohammed Morsi, has been confirmed as the winner of  the Egyptian presidential election.  How many women can you count in this picture?

One has to wonder why any women in Egypt voted for Morsi since they will sent to the back of the bus once he is sworn in.  Who knows what the full range of restriction's on women will be?  Will they be allowed to drive?  Will they have to wear a bhurkas?  Will their husbands be allowed to beat them as necessary?  This would be an excellent place for Dsee Perez-Scott to learn a lesson she would never forget.  Should we buy her a one way ticket to Egypt?
Posted by ultima at 9:50 AM 2 comments:

Dee Perez-Scott, as she calls herself on her un-American blog, is a zealous supporter of all illegal aliens and the Administration which continues to flaunt the law with selective enforcement. However, that name is as phony as her blog photo.  She substituted the photo of a movie star for her own photo.  She must be ashamed of her pudgy body.  In her latest rant about the illegal DREAM amnesty she says that Romney is pandering to the Hispanics but then insults Sarah Palin because she said the same thing about Obama.  This is just another example of Perez-Scott’s confused thinking.  Her rhetoric indicates that if Palin is nutty then that makes Obama equally nutty.


Politicians always pander to voting blocs as a necessary evil to getting elected.  When we look at the facts in this case, it is obvious that Obama’s action on DREAM was an overt manifestation of his pandering to Hispanics.  Why else would he announce this new policy only a few months before the election?  He wants their votes, every one of them, legal or illegal.  The Congress turned down the DREAM Act and Obama has the effrontery to ignore that fact and proceed on this own.  Obviously, he believes in government by fiat – in a word dictatorship.   First he ignores the laws he doesn’t like then when the Congress says no, he ignores that and proceeds via executive order.  Obama says send me the DREAM bill and I will sign it.  Sorry Obama but that’s not the way it works.  You may propose anything but Congress disposes.


Asked whether he would reverse the Obama DREAM amnesty executive order, or whatever Obamae is calling it these days, Romney made a mistake in not being more forthright on this issue.  He should have said, “Yes, I will rescind this order on the basis that it is an illegal usurpation of the role of Congress.  If the Congress sends me a bill that is fair to legal immigrants and provides some form of relief for illegal aliens brought to this country as young children by their parents, I will sign it.   However, I will insist that every DREAM applicant must have served in the Armed Forces for not less than 4 years.  During that time they will be able to earn money to help them pay for a college education.  Hopefully, that experience will deepen their love for this country, remove any stigma associated with their illegal status, and mature them in a way that later will enable them to be more successful in college.”
My own thoughts on this matter are in accord with the following paraphrase of a comment on another blog by a poster known only as v.  He says that we need to keep in mind that these illegals are not our children…they are Foreign Nationals born to two illegal aliens….born using the US welfare system and still continuing to suck up US taxpayer dollars! They refuse to speak English…even though we pay thousands more to educate an illegal alien than we pay to educate a US citizen…they are disruptive in class…are gang members…allow their children to tear up merchandise in stores……. In no way are they an asset to the US!  (end if my paraphrase of v's comment)

They speak their native language as well as their parents and could be a real asset in their homelands. Their exposure to the American republic and its ideas might enable them to change the governments and economies in their homelands for the better.  They have been parasites on the American economy for too long.  It is time for them to give back by leaving forthwith to seek their fortunes in their homelands.  If they are indeed among the best and the brightest of the illegals, that should not be a problem.

The problem or question that all Hispanics and others should ponder is: Will an America with 600 million people have the same standard of living and quality of life as an America with 300 million or less.  Those who choose to put their heads in the sand will be responsible for recreating the very conditions that caused them or their parents to flee their homelands.  This is what the pro-immigration propagandists are unlikely to mention.

v. continues, Rubio has shown that he represents the Interest of Foreign Nationals and Illegal Aliens….He has chosen to ignore what is in the best interest of legal US citizens! Most of us have been here for hundreds of years and we are being ignored! It’s time to take our country back…..No one has the right to enterr the US unless we invite them.  Obama has no authority to do this in violation of immigration laws. And it’s Time to remove the welcome mat! We have allowed too many Foreign Nationals into the US in too short a time. Approximately 7 Million since Obama took Office…they took my job and my friends next it will be yours or your Childs JOB!

Especially important to know during an election year such as this.
Translations of Common Euphemisms

Dee Perez-Scott: You should be able to understand the threats of continued population growth

With the decline in the number of White births in the U.S. and the rise of the births of minorities, there is nothing left to take hold of except population growth, which cannot be worked for the good of any citizen.   It, therefore, seems proper and right that we should seek a depth of understanding among both Whites and  minorities intelligent enough to understand that a stable population is in their own enlightened best interests.  Our finite natural resources mean that every addition to our population will reduce the amount of those resources available to each of us and thereby inevitably increase their cost.   This logically applies to the world population as well as our own.
How can this message be effectively delivered to everyone?  Everyone must be made to understand that continued population growth will ultimately result in a decline in the average standard of living and quality of life for us and our posterity.   Enlightenment will be difficult to achieve.  It will require the efforts of everyone: Democrats, Republicans, Independents, citizens and immigrants, but this is only way we can enable the enactment of enlightened immigration and tax policies aimed at the common objective of a stable population.
Posted by ultima at 4:17 PM 1 comment: